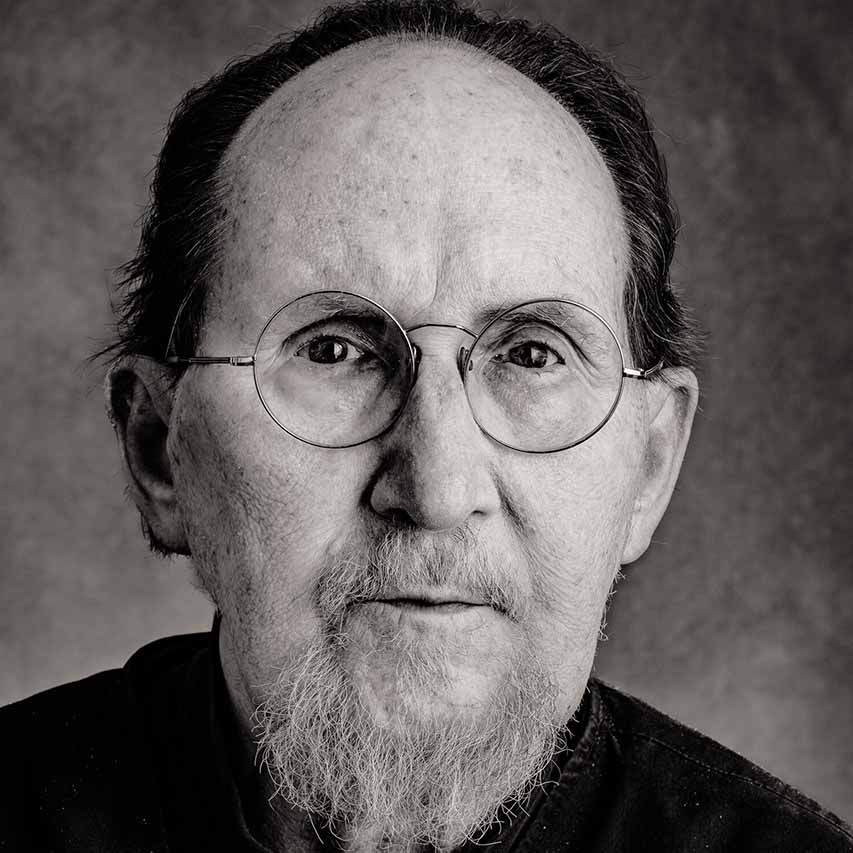 Andrew has been taking pictures since 1968. Born in Virginia in 1940, he went to grade school in Illinois, high school in El Paso Texas, and studied ilosophy at Earlham College in Indiana. In New York, he studied theology at Union Theological Seminary and acting with Stella Adler, and worked as a minister for a year in Vermont before going to India with the Peace Corps in 1966.

On his return journey from India in 1968, in Hong Kong, he bought his first camera -- a Pentax Spotmatic.

One day while serving in India with the Peace Corps, he was squatting in the dirt waiting for the bus to his village when he saw a strange stick figure materialize through the veil of heat mirage far off down the road. It was a very old, low caste, Indian man. He was tiny, terribly thin, dressed in nothing but a rag. Andrew, a 27-year old American, sat in the dirt watching the man coming closer, step by step, in the tortured heat and sun of the dusty road. This lean brown frame, with calloused feet and a heavy basket balanced on his head, drew up to Andrew and lowered himself to the ground beside him.

In that moment, Andrew realized that nowhere on the earth could he find a person more different than himself than this man. Here was a person more unlike him than anyone else could possibly be. Yet he realized with a shock, in that same moment, that what he experienced was not his difference -- but his sameness. “His most basic inner experience of himself and my most basic experience of myself, stripped of all culture and personal history, were exactly the same.”

This profound recognition has informed and empowered Andrew’s iconic, fine art photography to this day. We are all so very different, and yet, we are all the same. To hold these two insights together at one time is the beginning of true seeing.

On his return from the Peace Corps, he moved to Fayetteville, Arkansas, in 1971, opening a studio. It was there in Arkansas, shuttling between Little Rock and Fayetteville, that he settled down to do his life work as an artist and portrait photographer. From 1973 to 1977 he taught photography in the art department at the University of Arkansas. In 1981 he moved to Little Rock where he produced a wide range of exhibit length projects. In 1990 he moved back to Fayetteville to make it his home.

In 1986, as part of Arkansas’ sesquicentennial celebration, Andrew spent the year taking photographs of all the different people who live and work throughout Arkansas. The project culminated in book form as Arkansas People, published in 1987.

From the very beginning, Andrew has created exhibitions involving special groups of people, those who share the quality in our culture of being “unseen” by the general public. Working with various nonprofits and advocacy organizations, Andrew has photographed developmentally disabled children and adults, people suffering from mental illness, at-risk adolescents, Fayetteville’s poorest citizens and many very small children. He seeks to discover for himself, for his audience, the most challenging and diverse of subjects.

Many of Andrew’s subjects are misunderstood, and most live on the fringes of American survival. These are people stripped by birth or by circumstance of the inclination or even the capacity for pretense, and so offer themselves to Andrew’s camera with an openness and vulnerability that is both revealing and affecting.

The people in these groups -- people who seem so different and are therefore so often marginalized -- give us a chance to take a deep, long look at who we all really are, and to experience what Andrew experienced in India while waiting for the bus one day with that tiny old Indian man. We are, in fact, all one.

Over the years, people have frequently asked me “why,” why photograph the most desperately vulnerable people that I can find? Why return again and again to those people whose lives seem so different from mine and yet are so achingly familiar. It’s an excellent question.

Once, in the early 90’s, I showed a group of these pictures to an audience of people who had been diagnosed with serious mental illness, suddenly this guy jumped up from the audience and said “I know what these pictures are about… Courage.” He took me by surprise at the time and he was absolutely right. He knew what he was talking about.

But usually when people ask me that question. Why? I freeze up and the first word that comes to my mind is love. I photograph these people because I love them. Perhaps this seems like a trite or overly sentimental response but I know it’s what I’m actually feeling.

When I open my eyes and my heart to someone whose vulnerability has so clearly defined their very being, I experience the deepest level of ineffable connection, and the best word that I have for that profound experience of connection is love.

I was about 10 years old the first time I experienced an overwhelming Presence that seemed to come from inside of me and outside of me at the same time. An Awareness that penetrated everything with an incredible knowing love. Suddenly I felt completely seen, totally known. My initial response to this unique experience was to work towards becoming a minister. I worked towards that goal until I was 24 when I realized that job was more about serving an institution than about serving ineffable connection. After that I joined the Peace Corps for two years. On my way home from my service in India I attended a 10-day silent retreat in an ancient Buddhist monastery in Japan. I had just bought my first camera in Hong Kong and now I was discovering a new way to experience my deep connection with Presence.

50 years have gone by and my life has been touched and shaped by thousands and thousands of the most incredible human beings that one could hope to meet.

I could not be more grateful for all these gifts of encounter with all these people who are both totally other and completely the same as me.

And so dear reader, as you work your way through these pictures that sample and reflect my lifetime of work, perhaps you too will feel some reflection of the courage and love that moves us all forever forward into the all-embracing, all welcoming Presence.

*the answer to that question “How can we seem so different from each other and yet be so deeply the same?” is “because one loving awareness infuses infinite particularity”